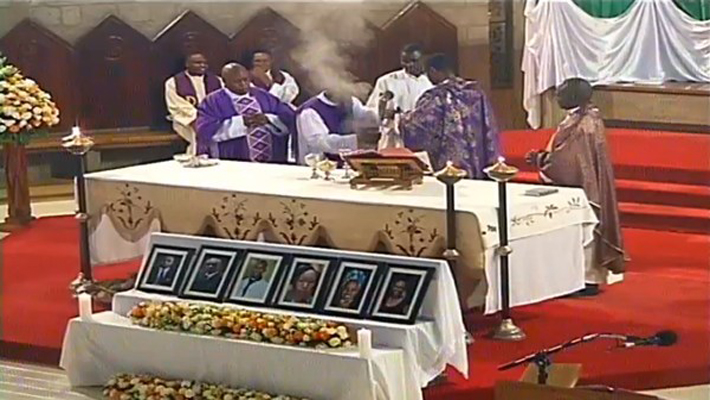 NAIROBI, JANUARY 25, 2019 (CISA)-Family, friends and colleagues of six employees of Dusit D2 Hotel, who died in the January 15 terrorist attack, gathered for requiem Mass held at the Consolata Shrine, Nairobi.

The Wednesday, January 23, Mass was celebrated by Fr Jackson Murugara the Parish Priest of Consolata Shrine alongside Fr Stephen in charge of the Central Denary in the Catholic Archdiocese of Nairobi, priests from the neighbouring Parishes; Holy Trinity Kileleshwa, St Austin Musingari and Fr Godfrey Msumange, the Continental Counselor of the Consolata Missionaries in Africa, and Fr Nicolas Makau.

In his homily, Fr Stephen gave hope to congregants assuring them of continuous support just as it was demonstrated by the neighboring parishes during the attack. He called for the need to strengthen the family support system to help those undergoing challenges such as losing a loved.

“God does not want us to take our lives and those of others, we need to forgive the attackers and keep praying for them to change,” he said.

He also lauded the neighboring parishes; Consolata Shrine, Holy Trinity Kileleshwa and St Austin Musongari for their contribution during the attack especially by providing foodstuffs and drinks to the rescuers.

The event came a day after six other staff of Cellulant who died in the same attack were remembered at a similar ceremony held at CITAM valley road church, Nairobi.