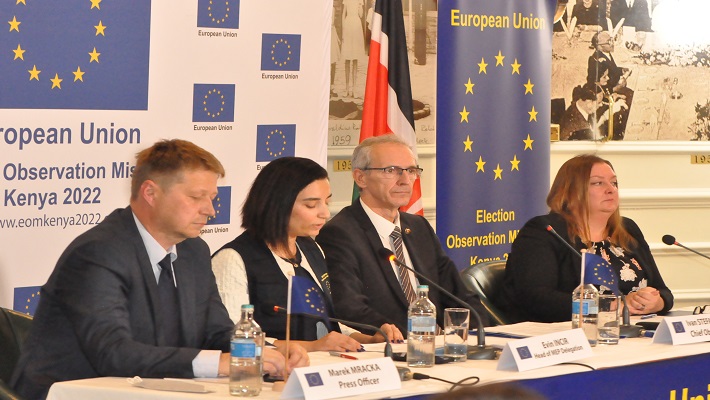 NAIROBI, AUGUST 12, 2022 (CISA) – “Fundamental rights were generally respected throughout the course of the campaign, but last-minute changes to the election process showed that some procedures still need to be improved,” Hon Ivan Štefanec, the European Union Election Observation Mission’s (EU EOM) Chief Observer in Kenya has said.

The member of the European Parliament (MEP) was speaking, August 11 at a press briefing in Nairobi while presenting the preliminary findings on Kenya’s August 9, General Elections.

“While the preparatory stages of the elections were managed effectively and professionally by the IEBC, as Election Day approached, important uncertainties persisted that impacted election day procedures. These uncertainties resulted from the IEBC’s desire to be responsive to past criticism,” Mr Štefanec noted adding that, “…the Independent Electoral Boundaries Commission (IEBC) could have done more to communicate more clearly with stakeholders throughout the process to enhance public trust.”

The chief observer who is a Slovak politician observed that, “The lead-up to the elections was characterised by significantly less tension and conflict than in the past. Parties and candidates were able to campaign openly throughout the country to get their message out to voters and the fundamental freedom of assembly was respected.”

However, according to the mission’s findings, the lack of a proper campaign finance framework was among the prominent issues that caught the eye of the observers.

“It created an un-level playing field, disadvantaging those with less access to funds, especially women. The widespread distribution of cash by candidates to voters during the campaign is contrary to commitments for democratic elections and has a corrupting influence,” said Mr Štefanec who, moreover, averred that the move by the National Assembly to thwart the introduction of campaign finance regulations before the elections “underscores the need for real political will and implementation.”

The EU observer mission intimated a largely peaceful and successful voting process which included Kenyans voting for a six-tier leadership structure that included the President, Governors, Senators, Members of the National Assembly, Members of County Assemblies and Women Representatives.

“Kenyan voters went to the polls on 9 August 2022 and cast their votes patiently in six levels of general elections…Voters exercised their right to vote in a generally peaceful manner throughout Election Day. The process was calm, albeit prolonged, due to last-minute procedural changes,” Mr Štefanec posited.

It is mandated with assessing the 2022 general elections in line with Kenya’s legal framework against international obligations and commitments for democratic elections and will remain in the country to observe post-election developments and publish a final report containing detailed recommendations in about two months.