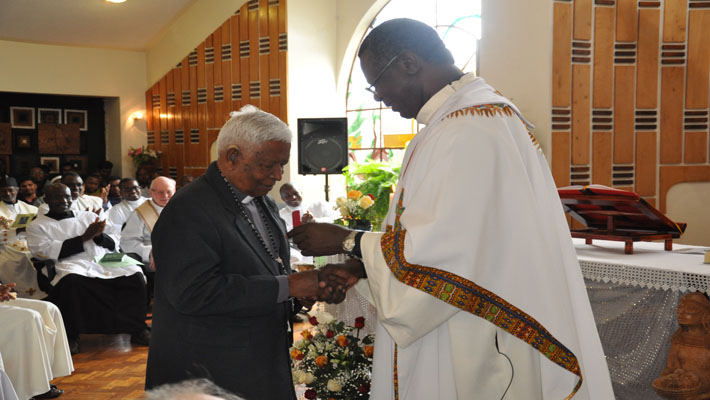 NAIROBI, AUGUST 2, 2019 (CISA)-Br Vincent Soreng SJ on July 31, received the recognition of Pope Francis for his outstanding work of caring for the environment.

The event held at Mwangaza Jesuit Centre Nairobi, coincided with the feast of St. Ignatius Loyola, founder of the Jesuits (Society of Jesus), and Perpetual profession of two Jesuits Fr Francis Njuguna and Fr Stephen Nzioki.

The Mass was celebrated by Fr Joseph Oduor Afulo, Provincial of the Jesuits Eastern Africa Province who presented Br Soreng with gifts from Pope Francis which included a letter, a special medal, and a rosary.

“At the age of 83, you continue to work in the vineyard of the Lord with the energy of a young man. For almost 50 years you have worked as a missionary in Africa, first in  South Sudan, Zambia, and finally in Tanzania and Kenya, with a keen eye on environmental conservation, through the promotion of horticulture and forestry. You have greatly done these tasks with great dedication, consistency, commitment and amazing diligence.

…Your practical teaching by doing has a double positive impact, first on the minds of the learners around and secondly on the sustainable beauty for the planet itself in preserving our common home for future generations.

In recognition of all you have done in India and in Africa, I sincerely thank you and I send you my apostolic blessing,” read in part the Pope’s letter that was read by Bishop Rodrigo Saldarriaga SJ, Vicar Apostolic Emeritus of Soddo, Ethiopia.

“I’m standing before you because God has loved me so much, that he has given me so much help and grace,” said Br Soreng in his speech.

He also thanked the Pope for the recognition and everyone who worked with him in planting trees, flowers, orchards and vegetables everywhere he worked.

The Mass was followed by a tree planting exercise at the Mwangaza Jesuit Centre, where Br Soreng planted two trees and gifted various religious communities with seedlings.

83 year old Br Soreng worked in Ranchi, India before he came to Africa where he has worked in various capacities in South Sudan, Zambia, Tanzania and Kenya.