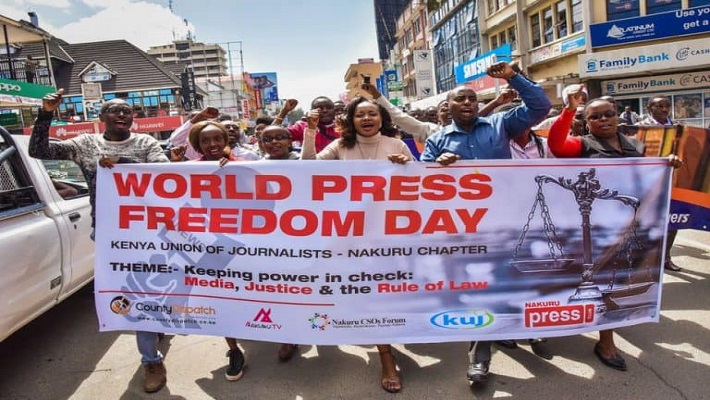 NAIROBI, MAY 4, 2021 (CISA)-Hon. Justin Muturi, Speaker of the National Assembly has challenged journalists to hold all the civil servants and public officials accountable on behalf of the people.

“As the Fourth Estate, you need to hold all of us in public office accountable on behalf of the people. You tell us whenever you think we are betraying the country; you celebrate us when we do something great, and you also set the agenda for us,” he said.

Hon Muturi was speaking May 3, during the World Press Freedom Day 2021 commemoration where he was the chief guest.

“The media in Kenya has come a long way. Today, we have very powerful statutory allies in Articles 33, 34 and 35 of the Constitution which talk about freedom of expression, media freedom, and access to information, respectively,” he added.

Hon. Muturi also called upon media houses to consider bettering remuneration and working environment for their staff in order to address the issue of corruption within the media and uphold Integrity within the media profession.

The event themed, “Information as a Public Good” took place during the annually held Media Summit and brought together the media fraternity and other stakeholders. It was held virtually, with a small group of invited guests assembling at the Serena Hotel Nairobi.

The World Press Freedom Day is a proclamation of the UN General Assembly of December 1993. This was made possible through a recommendation of UNESCO’s General Conference held in Windhoek Namibia in 1991 that led to the creation of the Windhoek Declaration.

This year’s celebrations marks 30 years since that Windhoek Declaration.

According to MCK, 3rd of May is a very important day to journalists worldwide, as this is the date set aside to celebrate the World Press Freedom Day and its also serves as a reminder to government on the need to respect their commitments to press freedom.

On this day, journalists reflect on issues affecting press freedom and professional ethics.