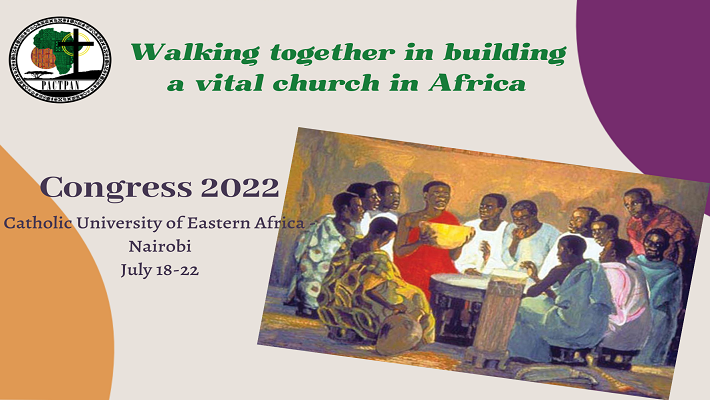 NAIROBI, JULY  5, 2022 (CISA)- The Second Biannual Pan-African Catholic Congress on Theology, Society and Pastoral Life will be held from July 19 to 22 in Nairobi, Kenya, under the theme “Walking Together for a Vital Church in Africa and in the World”.

In a press release sent to CISA, the congress that is set to attract more than “100 international participants representing 4 continents, 4 African prelates and some representatives from the Vatican,” will be hosted by the Pan-African Catholic Theology and Pastoral Network (PACTPAN) in conjunction with the Catholic University of Eastern Africa (CUEA).

Among the key themes that the congress will discuss in the four-day meeting include; Synodality, Women, Children and a Vital Church.

According to PACTPAN, the network was built on the premise of the African Catholicism Project launched in 2015, “an international collaborative effort with an overarching goal to expand the production and distribution of scholarly and pastoral resources by African Catholics,” and “has offered a forum for African Catholic scholars to collaborate in producing and disseminating significant works for the Church and society in Africa.”

The project has contributed to the formation of scholars in the African Church by bringing together generations of scholars, teachers, and pastoral workers, with an emphasis and commitment to streamlining women at all levels of our work, to create scholarly resources and make these resources broadly available for the use in both the academy and the ministry.

Thus, the mission of PACTPAN is to bridge the gap between pastoral practice and multi-disciplinary scholarly work on the African continent “by collaboratively listening to both God and our people, to inspire hope and transformational faith and promote and curate best practices for the betterment of church and society.”

The network, which is currently based at the Center for World Catholicism and Inter-Cultural Theology (CWCIT), DePaul University, Chicago-USA, has a membership of over 200 active members made up of African scholars from very diverse fields and front-line pastoral workers also engaged in a variety of different ministries.

The membership of the network is open and drawn from Africans on the continent and in the diaspora.

In the same congress, the board of editors for Concilium, the prestigious and oldest theological journal in the world, will also be holding their first-ever Africa-based meeting.