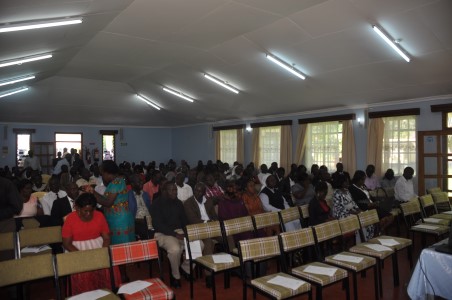 BUNGOMA, MAY 18, 2018 (CISA) -The Catholic Diocese of Bungoma Education Department today hosted 340 Principals and directors of public catholic sponsored secondary schools to a meeting to discuss enhancement of academic performance.

The meeting that took place at St. Patrick’s Pastoral Centre, Kabula was graced by  Bishop Norman King’oo Wambua of Bungoma Diocese who in an earlier interview with CISA noted that, “Schools lay a good foundation in evangelization and moulding the young people.”

According to the Chairman of the CaSPA (Catholic Secondary Schools Principals Association)  in Bungoma diocese,  Mr Dismas kuloba of St Teresa Kabula, Catholic sponsored schools within the Diocese of Bungoma have been performing very well in recent years, however, there was a call to do more to improve the performance.

“…we are doing fairly well as far as academic performance, but I wouldn’t say we are good or yet there,” said Temtila Nyongesa the coordinator of CaSPA Bungoma central.

Some of the challenges pointed out by the principals were parents not paying fee thus ending up with huge fee balances, the government not releasing funds in good time, and disciplinary cases by students.

Some of the remedies for this were: consulting the parents and having payment plans, urging the government to be more vigilant in releasing funds and grounding school activities in faith in order to mould character of the students.