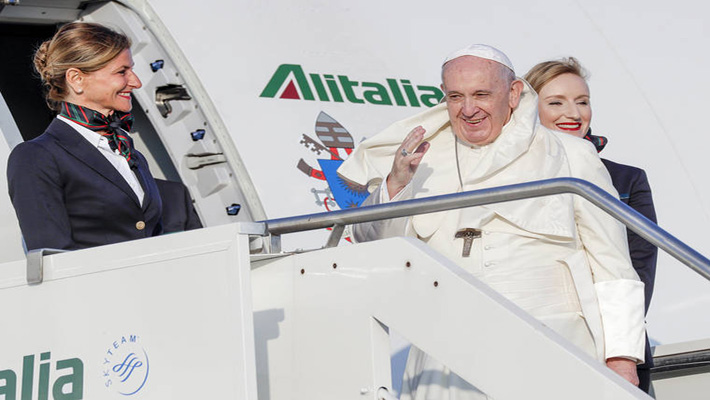 MOKA, SEPTEMBER 10, 2019 (CISA)- Pope Francis on September 9 concluded his 31st Apostolic visit to Mozambique, Madagascar and Mauritius with a meeting with government authorities, civil society leaders and the diplomatic corps in the presidential palace in Moka where he encouraged them to promote economic policies that are favorable to all people.

“Since its independence, your country has experienced a steady economic development that should certainly be a reason to rejoice, but also to be on guard.  In the present context, it appears that economic growth does not always profit everyone and even sets aside – by certain of its mechanisms and processes – a certain number of people, particularly the young,” Pope Francis said.

“That is why I would like to encourage you to promote an economic policy focused on people and in a position to favour a better division of income, the creation of jobs and the integral promotion of the poor,” he noted.

He also urged the Mauritians to be welcoming of immigrants, and to uphold their dignity and human rights.

“Your people’s DNA preserves the memory of those movements of migration that brought your ancestors to this island and led them to be open to differences, to integrate them and to promote them for the benefit of all.  For this reason, I encourage you, in fidelity to your roots, to take up the challenge of welcoming and protecting those migrants who today come looking for work and, for many of them, better conditions of life for their families,” he said.

“Make an effort to welcome them, following the example of your ancestors, who welcomed one another.  Be protagonists and defenders of a true culture of encounter that enables migrants (and everyone) to be respected in their dignity and their rights,” he urged.

He lauded the religious tolerance and co-existence among them and encouraged Catholics to continue participating in the process of maintaining the peace.

“I would like to express my appreciation for the way that here in Mauritius the different religions, while respecting their specific identities, work hand-in-hand to contribute to social harmony and to uphold the transcendent value of life against every kind of reductionism.  And I express once more the desire of the Catholics of Mauritius to continue to participate in this fruitful dialogue that has so deeply marked the history of your people,” he said.