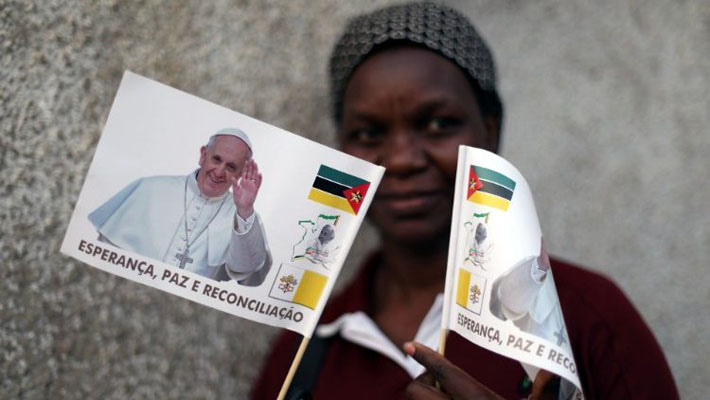 MAPUTO, SEPTEMBER 6, 2019 (CISA)-Pope Francis has lamented of how individuals take advantage of poverty levels in Mozambique for their personal interests.

In his homily during Holy Mass in Maputo’s Zimpeto Stadium today, September 6, Pope denounced the practice which he said, “…happens with brothers and sisters of the same land, who let themselves be corrupted.”

“Mozambique is a land of abundant natural and cultural riches, yet paradoxically, great numbers of its people live below the poverty level.  And at times it seems that those who approach with the alleged desire to help have other interests,” Pope Francis said.

He encouraged the spirit of concern for others, acknowledging and appreciating each other as brothers and sisters to the point of identifying with their lives and pain.

“This is the best barometer for gauging any kind of ideology that would manipulate the poor and situations of injustice for the sake of political or personal interest,” he said.

In line with the theme of the visit, “hope, peace and reconciliation” Pope Francis asked Mozambicans “not to insult or revenge, but to establish a new bond which brings peace.”

“It is not easy to speak of reconciliation while wounds are still open from the years of conflict, or to take a step towards forgiveness, which is not the same as ignoring pain or giving up our memories or ideals,” he noted, instead asked them to “…show an active, impartial and extraordinary benevolence towards those who have hurt us.”

Before Mass, Pope Francis paid a visit to the Zimpeto Dream Center which takes care of mothers and children with HIV/AIDS.

“This Centre shows us that there are always people ready to stop and show compassion. You have heeded the silent, almost inaudible, cry of countless women, so many of them living in shame, marginalized and judged by all,” he said.

The pope has since arrived in Madagascar, the second stop on his three-nation Africa visit. He will also visit Mauritius before returning to Vatican on September 10.