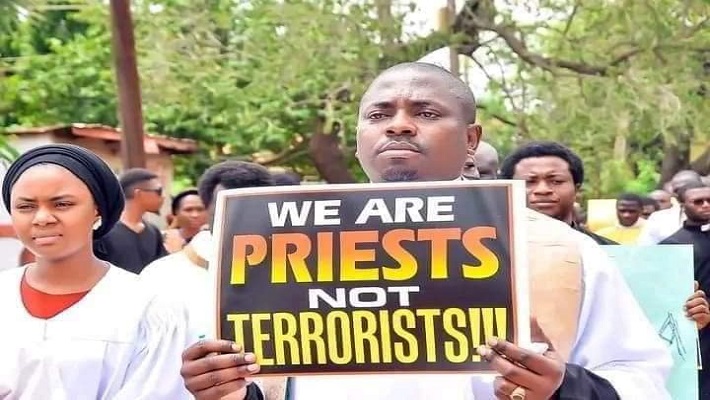 KADUNA, JULY 1, 2022 (CISA)- Rev Fr Vitus Borogo of the Catholic Archdiocese of Kaduna who was killed on June 25, at the Prison Farm, Kujama, along Kaduna-Kachia Road, has been buried in a sombre funeral Mass held at Our Lady of Apostles’ Independence’ Way on June 30.

The funeral service also witnessed over 700 priests hold a peaceful protest after the burial with some of them carrying placards with inscriptions; “We Are Priest and Not Terrorists,” “Government Should Secure Nigerians,” and “Anyone Who Killed Lost His/Her Right To Life,” “Justice Must Be Served,” and “Do We Still Have A Government?”

“I feel devastated, it is so painful that within one year I have buried three priests who died in the hands of these bandits. The most painful one was late Fr Aketeh whose burial took place last three weeks without his corpse,’ bemoaned Most Rev Mathew Ndagaso of the Catholic Archdiocese of Kaduna during the funeral.

“Over my 60 years of age, we have not seen it this bad as it is now, even during the civil war, it was not bad as it is now. Something is wrong with the leadership of this country; we live in confusion in this country. We no longer have tears in our eyes because the source of our tears has dried up because of constant crying. We have also lost our voices because when you talk nobody listens, you cry nobody hears your cry, but we will not lose hope, one day God will wipe our tears,” lamented the archbishop as he decried the rising insecurity in the country.

Archbishop Ndagaso called on the government to protect the vulnerable communities against banditry saying  “any politician who cannot secure Nigerians should not contest for any political position. It is better the person withdraws from the race.”

The 50-year-old Fr Vitus Borogo, until his death, was the Chaplain of the Catholic Community of the Kaduna State Polytechnic and also the Chairperson of the Nigerian Catholic Diocesan Priests Association (NCDPA), Kaduna Chapter.