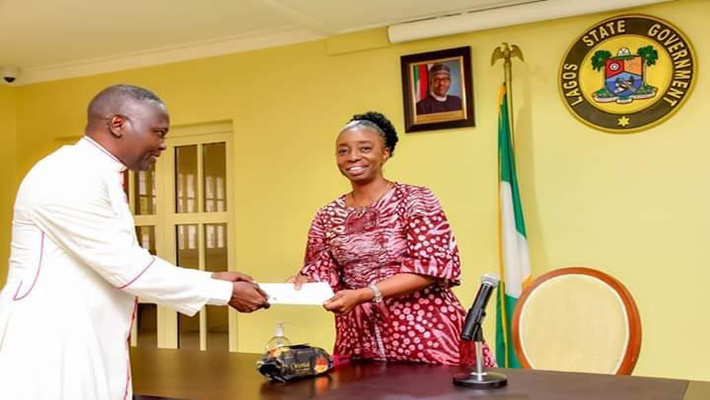 LAGOS, APRIL 21, 2020 (CISA)- Archbishop Alfred Adewale Martins has donated relief items to Lagos State Government on behalf of the Archdiocese of Lagos in support of its efforts to provide assistance to the poor and contain the coronavirus pandemic.

According to Fr Anthony Godonu, Director of Social Communications Catholic Archdiocese of Lagos, the items included 500 bags of rice and beans and 4000 pieces of hand sanitizers. In alignment with the Catholic Bishops’ Conference of Nigeria (CBCN), he also announced the decision to make St Raphael Divine Mercy Hospital, Ijede available for use as an isolation center if the need arises.

“We commend the hard work that has been done in ensuring that we are a model state in the effort to stem the spread of the virus. We also commend the effort that has been made to provide palliatives to support the most vulnerable among us. However, we cannot but admit that providing for all the people in our state is a herculean task and it must create its own nightmare for the government. So, as a Church, we hear the cry of the people as well as understand the challenges of Government,” the Archbishop said.

Archbishop Martins noted that the task of managing the pandemic and taking care of the less-privileged was enormous and so government should be supported, hence the Catholic Church in the Archdiocese of Lagos decided to show her support in order to ease the pain of the  poor and vulnerable within the state.

The Archbishop later revealed that the support offered to Lagos State Government was in addition to the provisions for the poor that he directed the over 180 parishes of the Archdiocese to make in their different localities spread all over the State. He commended the Priests and the faithful of the different Parishes for taking action on the directive.

Responding to the donation, first lady Dr (Mrs) Ibijoke Sanwo-Olu, thanked the Catholic Church for its kind gesture and assured that the donated items will be properly utilized for the purposes they were meant for.

Msgr Anthony Obanla Chancellor of the Catholic Archdiocese of Lagos, Fr Anthony Godonu, the Director of Social Communications, Fr Marcellinus Teko, the Holy Cross Cathedral Administrator and Secretary to the Archbishop Fr Vitalis Ezeigwe took part in the donation of the items.