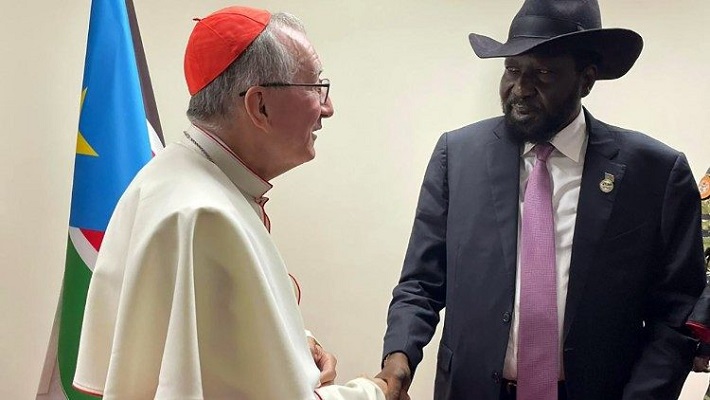 JUBA, JULY 8, 2022 (CISA) – “Only if we are embraced by his love can we embrace one another and make rise up from the earth the new cry: no more violence, never again fratricidal conflicts, never again war!” Cardinal Pietro Parolin appealed to the citizens of South Sudan on July 7.

In his homily, during the public Mass held at Dr John Garang Mausoleum, Juba, and attended by the top leadership in the country led by President Salva Kiir Mayardit, Cardinal Parolin urged the people to reflect on their path of darkness, and “seek to be clothed in light.”

“Yes, dear brothers and sisters, you are that people, dwelling in a land rich in resources and possibilities but at the same time covered in darkness and overshadowed by violence.  You are that people burdened by the yoke of oppression, poverty and work, who desire to rejoice in freedom,” nudged Cardinal Parolin while analogising the book of Prophet Isaiah (cf. Is 9:1-3).

“Brothers and sisters, when we leave too much room for resentment and bitterness of heart, when we poison our memories with hatred, when we cultivate anger and intolerance, we destroy ourselves.  We continue to be, in the words of the prophet Isaiah, a people that walk-in darkness.  Instead, we are called to inaugurate a new history of justice and peace, in which we can take one another by the hand as members of one family, supporting one another, building a common future on the basis of dialogue and with the strength of meekness,” he added.

The Vatican Secretary of State, called for reconciliation and for the people not to regulate their relationships based on traditions, but to open themselves to a new standard, that is “the revolution of the kingdom of God, which transcends human traditions and brings them to fulfilment.”

“With respect to our familiar traditions, usages and customs, and in particular our usual ways of acting and reacting in the face of evil, Jesus calls us to take a step forward, to embrace the startling newness of the Gospel message.  To love not only those who love us, to break out of our own small group, to refuse to repay evil with evil.  To renounce revenge, to turn the other cheek, to love our enemies,” he urged.

Africa’s youngest nation, South Sudan, has been riddled by civil conflict since its independence in 2011, which has undermined its development gains and created a dire humanitarian situation in the country. To this, the cardinal warned that the people need “to learn to think and act in a certain way because the world has its own criteria, and the flesh drives you to respond to evil in certain ways,” urging, “…be different, take one more step, open yourself to the courage of love.”

“It is the courage of a love that is not imprisoned in the mentality of “an eye for an eye and a tooth for a tooth” (v. 38):  It does not respond to evil with vengeance; it does not settle conflicts with violence; it does not love only its own while standing aloof from others,” counselled Cardinal Parolin.

In his humbling homily of peace and reconciliation, Cardinal Parolin reiterated the desires of the pope, “May this be the time, dear brothers and sisters, for turning a page.  That is what the Holy Father encouraged you to do in his message a few days ago.  He told you that “you have a great mission, all of you, beginning with your political leaders: it is that of turning a page in order to blaze new trails, new paths of reconciliation and forgiveness, of serene coexistence and of development.  A mission that entails looking together to the future, to the many young people in your lands, so rich in promise and yet so troubled, in order to offer them a brighter future.”