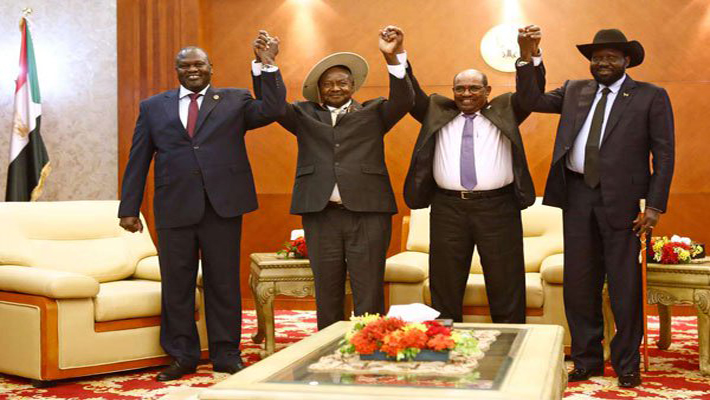 The two leaders met in Khartoum on Monday June 25 mediated by Sudanese President Omar al-Bashir after plans to strike a peace deal during the Inter Governmental Authority on development (IGAD) failed.

The areas agreed upon include a permanent ceasefire, cantonments for all forces and the deployment of forces by IGAD and the African Union to protect the ceasefire.

According to the agreement seen by the media, the two parties agreed to have allowed the Sudanese government to secure the oil fields in South Sudan in coordination with the juba administration, and to rehabilitate the wells to restore the previous levels of production.

They recommitted to working together to restore peace and order in South Sudan after 2 years of war and lawlessness in the country following the collapse of the peace deal in 2016.

Sudanese President Omar Bashir on Monday had recommitted to end the war in South Sudan though dialogue and further put up measures to reclaim the country.

“I would like to assure everyone that Sudan will work hard and try all measures based on our experience during the war and peace times to ensure that this initiative is a success,” said President Bashir.

“We shall use our experience in the management of national and community dialogues to address all the issues,” he added.

The peace deal comes at a time when the country is facing one of the largest humanitarian crises with the United Nations estimating refugees of South Sudanese origin in the neighboring countries at about 2 million people.

It also approximates of over a hundred thousand lives lost in the course of war.