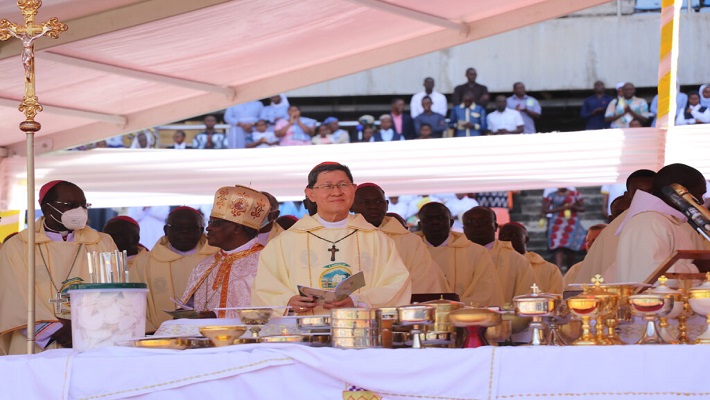 In his homily during the opening Mass of the Association of Member Episcopal Conferences in Eastern Africa (AMECEA) 20th Plenary Assembly held at Benjamin Mkapa Stadium, Dar es Salaam, Tanzania, Cardinal Tagle opined that the present-day global conflicts and divisions and lack of care for the environment have contributed to a state of helplessness in the world.

“We need to ask ourselves why is it that caring is less these days?” asked the Cardinal.

The AMECEA 20th Plenary Assembly, which is being held from July 9 to 18, under the theme “Environmental Impact on Integral Human Development,” will focus on the papal encyclical Laudato Si (on care for our common home), Faith, Values, and Ethics in the Care for the Environment, Care for the Integral Ecology, and Church and Government Collaborations among others.

The Prefect of the Congregation for the Evangelization of Peoples underscored the importance of the theme of the AMECEA meeting observing that it has come at a time when the world is faced with environmental challenges that have resulted in conflicts, violence and divisiveness.

Cardinal Tagle recognized environmental degradation as one of the major threats facing the planet and urged the 20th AMECEA Assembly delegates to address the underlying causes of this threat that compromises the natural environment.

“We need to discuss the root cause of the environmental degradation to have concrete resolutions after the Assembly otherwise we will have cosmetics resolutions from the assembly,” he appealed.

In referring to the three readings of the day taken from Deuteronomy 30:10-14, Colossians 1:15-20 and Luke 10:25-37, Cardinal Tagle noted how the scriptures speak to the closeness of God to creation and humanity. He wondered why humanity should destroy creation if all that was created invisible and visible have the presence of Christ.

Cardinal Tagle was, however, appreciative that the Catholic Bishops, clergy, religious and laity from Eastern African Countries have gathered in Tanzania to proclaim the Good News that humanity needs to come together.

The 10-day assembly in Dar es Salaam has seen more than 100 Catholic bishops from Ethiopia, Uganda, Sudan, South Sudan, Tanzania, Malawi, Zambia, and Kenya, that make up the AMECEA region, attend the quadrennial plenary, which is the supreme authority within the association.