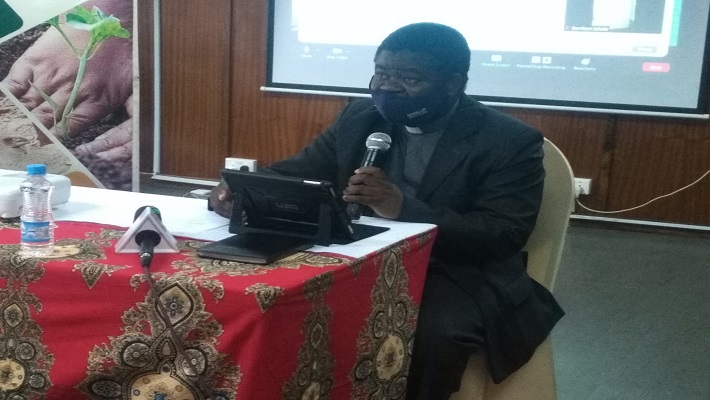 LUSAKA, SEPTEMBER 29, 2020 (CISA)-Zambia Conference of Catholic Bishops (ZCCB) has described an ecological emergency in the country and called on the government to prioritize environmental programs for the poor and vulnerable.

In his address during a September 25 Webinar themed, “Jubilee for the Earth – Reflections on responding to the Ecological Crisis,” held in commemoration of the Season of Creation, Fr Cleophas Lungu the Secretary General of ZCCB said the cry of people on earth cannot be overlooked.

“The celebration of this anniversary year should lead us to come up with long-term action plans aimed at promoting the practice of integral ecology in our families, parishes and dioceses, religious orders, our schools and universities, our healthcare facilities, business and agricultural institutions, and many others as well,” he said.

His address coiled around the theme ‘A Just transition for our Planet in the Context of Laudato Si’ and COVID-19’ stressed on Pope Francis emphasis on the underlying moral and ethical context of the ecological problems and the call for meaningful commitment, not just for the Church, but for all people, because what is at stake is ‘Our Common Home’.

“Pope Francis is calling for a re-evaluation of the prevailing models of global development and a redefinition of our notion of progress so that it can truly serve the common good,” he said.

As the Church marks the fifth the Fifth Anniversary of Laudato Si Fr Lungu says ZCCB is joyous too that faith communities are coming together to create a more just, peaceful and sustainable world. He said Laudato Si has inspired many initiatives at local and global levels for the care of our common home and the poor

“From the faith perspective, we are particularly happy that the Season of Creation is becoming a truly ecumenical initiative. As Pope Francis urges us, “Let us continue to grow in the awareness that we all live in a common home as members of a single family,” Fr Lungu said.

In view of the upcoming 2021 General Elections, he stressed on the need for the government not only to concentrate on the political aspect instead put measures especially during political campaigns to avoid parties being violent with each other.

“Avoid being violent with each other as we are often violent with nature whenever we cut trees recklessly and pollute our streets with solid waste and damp our toxic waste in our water bodies. We look forward to Issue-Based Campaigns and do hope that the care of the environment and preservation of our natural forests, endangered tree species such as the Mukula Tree (Rose wood) as well as animal species like the Black Lechwe will become a campaign issue,” said Fr Lungu said.

The ZCCB Secretary General further noted the importance of Policy, legislation and investments focused on the common good and guarantee that global social and environmental goals are met in reiterating Pope Francis’ repeated call for the cancellation of the debt of the most vulnerable countries, in recognition of the severe impacts of the medical, social and economic crises they face as a result of COVID-19.