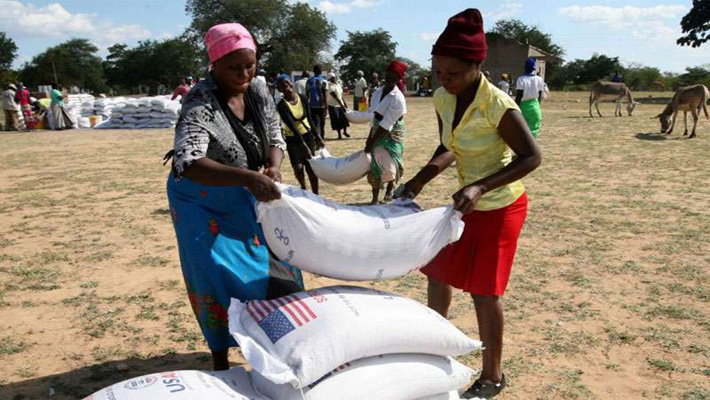 HARARE, FEBRUARY 28, 2020 (CISA)-Zimbabwe Catholic Bishops’  Conference (ZCBC) have made an urgent appeal for food aid in cash or kind amid a food security crisis with nearly 8 million people facing starvation due to drought and economic meltdown.

“Our appeal and response is on behalf of the people of every race, culture, gender and religion in Zimbabwe who are and will soon be in dire need…our goal is to mobilise sufficient food aid in order for us to make a difference to the lives of the many millions who face starvation, including children, women and those living with HIV/AIDS,” said Archbishop Robert Ndlovu, president of ZCBC.

Speaking at a press conference at the Africa Synod House in Harare on February 27, Archbishop Ndlovu confirmed the World Food Programme’s report that nearly 8 million people will be requiring aid in 2020 as the country faces severe food shortages.

Archbishop Ndlovu said the food insecurity situation is affecting not only rural but also urban people, school children, newly born babies and their mothers, as well as refugees.

“This food insecurity will affect urban and rural communities. Millions of school going children, refugees, and the poor will suffer from the severe effects of this drought.”

“Our health coordinators in our hospitals are telling us that some of the newly born babies instantly show signs of not being healthy. Their mothers too, because they may eat only once a day, may not produce enough breast milk for the babies and that will affect the development and growth of that child,” said Archbishop Ndlovu.

The bishops are targeting to raise over US$1 million dollars for the initial response programme which will be administered to “all people” through Caritas.

He noted that the response to this crisis will ‘reach out to the most vulnerable’ by providing basic commodities such as maize and mealie meal, cooking oil, beans and other nutritious foods.

Archbishop Ndlovu said through Caritas Appeal, the Church had already raised over US$200 000 and distributions in some areas have already started.