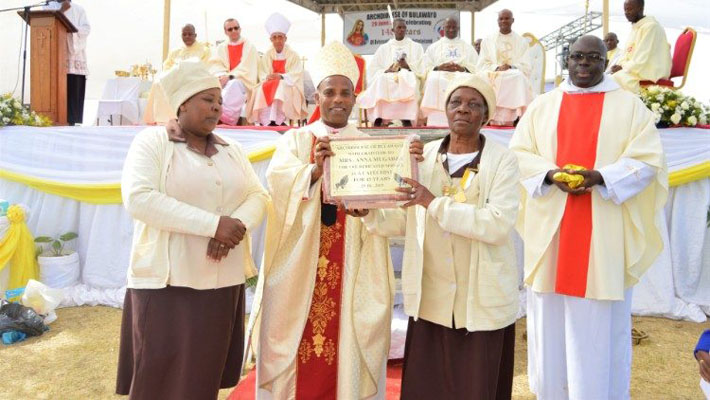 MATABELELAND JULY 9, 2019 (CISA) – Pope Francis on June 29 bestowed special honours to two catechists, Mrs. Anna Mugadza and the late Mr. Alexander Regis Gwenelo, from Matabeleland for their contribution to the growth of faith in the Catholic Archdiocese of Bulawayo in the last 45 years.

“These people toiled on foot and sometimes on bicycles in a bid to spread the mission of Christ. Most of you remember the name “Mr. Gwenelo” who was very instrumental in shaping people’s faith through catechism in the Archdiocese…he worked hard for the archdiocese to be what it is today. There are many catechists whose work we cherish for supporting the mission of the Church and for their zeal to educate people about the values of the Gospel,” said Archbishop Alex Thomas of Bulawayo as he presented Mrs. Mugadza with a plaque of recognition from the Pope.

Archbishop Thomas said that catechists, such as the late Mr. Gwenelo and Mrs. Mugadza, played a very important role in the growth of faith in Matabeleland and in the whole of Zimbabwe.

At the event to commemorate 140 years of evangelization in the Archdiocese of Bulawayo at Our Lady of Fatima in Pumula South, the Archdiocese named the new block at Emthonjeni Pastoral Centre after Gwenelo and presented a plaque bearing the late catechist’s name to Fr Limukani Ndlovu, the priest in charge of the pastoral centre.

“This man played a significant role in the Archdiocese as a lay person. He was involved in the formation of pastoral teams, small Christian Communities, catechists, translations, church music and was also one of the trainers at the Pastoral Centre. He was dedicated to his work. He never demanded anything from the Church, he was a humble man who respected Church authorities,” Fr Limukani said.

He noted that the involvement of catechists as teachers of faith was a sign of empowerment of lay people in the Church, hence should be promoted.