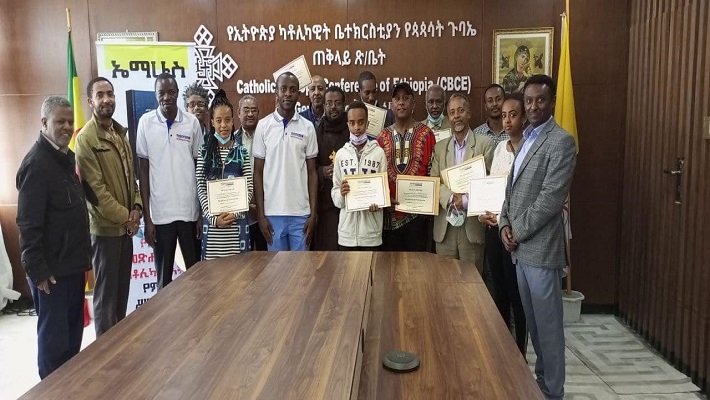 “The preparation of the audio Bible was carried out successfully by a standard radio studio in the office’s social and public relations department. The recording was performed by Stephen Omondi and Nicholas Azere of Theovision Kenya, both of whom Catholics and other experienced members of the Church,” statement by Ethiopian Catholic Secretariat reads.

In his message of thanks, Abba Gabriel Woldehana, Deputy Secretary General of the Ethiopian Catholic Bishops’ Conference, said: “The word of God is heard from the beginning. God will speak to his people, and the people will listen to him. Especially in the Catholic Church, we do not have the experience of listening to and meditating on the Word of God in various liturgies.”

“You are the voice of God, you should be happy that you have helped so many people not to stay away from the Word of God just because they can’t read or write. I would like to thank God for helping us to carry out this sacred and costly service from the beginning to the present day,” he said during thanksgiving Ceremony held by the General Office of the Bishops’ Conference.

Tekabe Neway a representative of the Bible Society told participants who took part in the exercise to thank God for the opportunity to be involved in evangelization work which he says will last for the next 20 years.

“We would like to express our gratitude to the Catholic Church for its unparalleled support throughout the course of our work throughout Africa,” he said.

He added that the recording of the audio Bible covers only part of the New Testament and follows the original drama in Amharic language, which will be used by many when it is completed. He said it could take four to six months for the project to be completed.