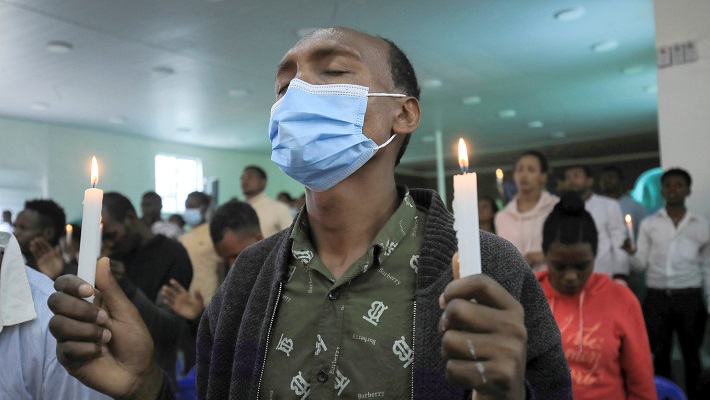 ADDIS ABABA, AUGUST 5, 2022 (CISA)-Churches and monasteries are closing down in troubled Ethiopia’s Tigray region as priests and religious nuns flee the Catholic Diocese of Adigrat due to the continued spate of insecurity in the region whose effects are felt across the country.

In a statement shared on August 2 by the Catholic Bishops Conference of Ethiopia (CBCE), the bishops warned that the conflict and lack of peace in the country continue to cause a “big challenge” to its mission.

“The Church is facing a great challenge due to the lack of peace in the country, which is hindering her from carrying out apostolic services effectively. Many of our parishes, including the Adigrat Diocese, share the challenge. Priests and Sisters have fled their places due to security, and the number of closed Chapels and Convents is increasing,” reads the statement loosely translated from Amharic.

Since the fighting began in the Tigray, the region of Adigrat has remained isolated from the rest of Ethiopia.

“The ongoing siege and blockades by the government and occupation forces have completely isolated us from our pastors and communities, from the rest of the world and from our international Catholic networks. As a result, 5.2 million people are forced to suffer from severe malnutrition, hunger and near famine,” lamented Bishop Tesfaselassie Medhin of Adigrat in an earlier statement dated July 17.

“We strongly request that the government and the people work together to ensure peace in our country so that citizens can live freely. They are also struggling to meet their basic needs. Citizens are still being killed and exiled because of their identity in many places (for recent example, in Wolga),” said the Catholic bishops.

The statement released after the 53rd Plenary Assembly held from July 20 to 22 in Addis Ababa, implored the conflicting parties to focus on lasting peace in the region.

“As we have done in the past, we call on all concerned parties to focus on the option of peace, dialogue and reconciliation. We assure to contribute our part to achieving peace. Our church will do its best to make the national dialogue that has started successful. The church will continue to strengthen its contribution so that all possible efforts are made,” the bishops pledged.

The bishops also committed that they will continue to do all that is possible to ensure that people affected by drought get emergency help.

“We also are very much concerned about our people affected by the drought and ask all concerned to work hard and united to reach them to receive emergency aid,” appealed the prelates.