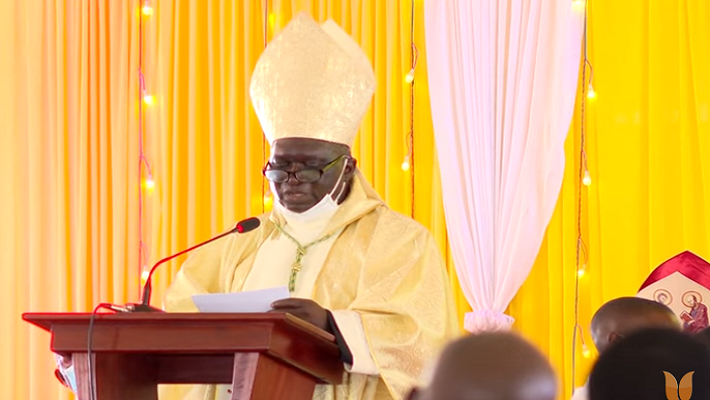 NAIROBI, NOVEMBER 23, 2021 (CISA)-Archbishop Phillip Anyolo of the Catholic archdiocese of Nairobi in his maiden speech during his installation on November 20 promised to call out evil in society and advocate for accountability in the Church and government.

While addressing the Catholic faithful who had thronged  St Mary’s Msongari grounds for the celebrations, the archbishop reiterated that together with other religious leaders shall uphold the role of the Church as a voice and conscience of the nation.

“As the new shepherd of Nairobi and in collaboration with my colleague bishops and with members of the clergy we shall continue to be the voice and the conscience of the nation even as encouraged by the president. We will not shy away from being the conscience of our nation. We love it, we love you. I will not shy away also from pointing out any ills in the society,” he said.

The archbishop who previously has served as the local ordinary for Kericho diocese (1996), Homabay diocese (2003) and Kisumu archdiocese (2019) said “I thought that was my last point.”

“I was just beginning to settle down in Kisumu and the idea of moving again here never crossed my mind. But when the call was made on 20th of October, I had to juggle with my mind and finally, I told His Excellency through him to the Holy Father I told him to let it be done,” said Archbishop Anyolo.

“I am grateful to the Holy Father for this New appointment. It is a sign of his trust in me and I am consciously aware of the position of Nairobi as a Key ecclesiastical sea in the country. I am therefore under no illusion in the magnitude of the responsibility that has been bestowed upon me and I accept with great humility,” the archbishop added.

The installation Mass was presided by Archbishop Hubertus Matheus Maria van Megen, the Apostolic Nuncio to Kenya and South Sudan. In his homily, he said Nairobi needs “A good shepherd that leads the people of God to those fresh and green pastures that Psalm 23 speaks of.”

The nuncio applauded Archbishop Emeritus John Cardinal Njue who retired on January 4, 2021, for steering the diocese to new heights.

“We thank God for the gift of His Eminence card John Njue as the Shepherd of this Archdiocese of Nairobi. We thank God for his life, for his care, for his love and dedication to the flock of Christ through all these years. It is more than 14 years ago that the then Bishop John Njue was appointed to Nairobi,” said Archbishop van Megen.