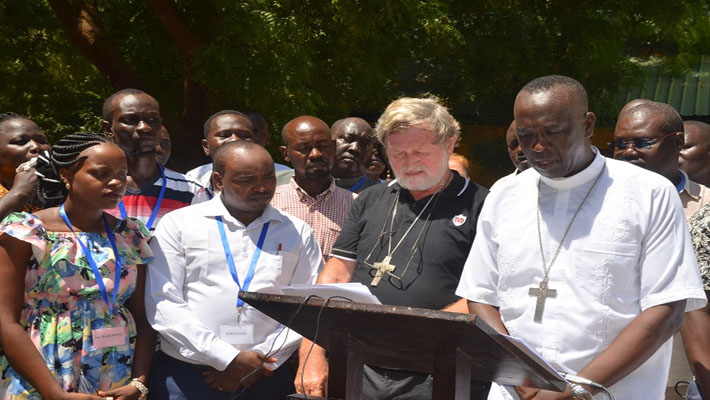 LODWAR, MAY 21, 2019 (CISA) – The Kenya Conference of Catholic Bishops’ Commission for Refugees, Seafarers and Migrants has urged the government, local communities, Civil Society Organizations and Faith Based Organizations to utilize ‘An Integrated Peaceful Disarmament Approach’ to address the root cause of individuals possessing arms.

In a press statement released at the end of the 6th Annual Inter-Diocesan Conference on Cross Border Peace and Evangelization that took place from May 13 -17 at St Teresa’s Pastoral Center, Lodwar they urged the governments represented to use the approach to achieve long lasting peace.

“From our deliberations, we have found that peaceful disarmament is the best way of achieving lasting peace and sustainable development in our countries,” reads the statement signed by Bishop Virgilio Pante, the commission’s chairman alongside his vice Bishop Dominic Kimeng’ich.

They called upon grassroots communities to collectively reject the attraction of armed violence as a solution to their problem stating that they only bring more harm than good.

“Proliferation of these arms has caused thousands of deaths and injuries, displacement and forced migration of people, hampered development, loss of hundreds of livestock among pastoralist communities, heightened insecurity, loss of productivity, reduced economic output and insurgencies.”

They emphasized on the need to start the process of peaceful disarmament as early as now in order to achieve peace in the region owing to the fact that it’s a process that begins with the transformation of the individuals.

“The process of peaceful disarmament begins with transformation of the individual and disarming the mind and the heart. This can only be done in an environment of trust, collaboration and commitment to the respect and protection of human life by the local communities, Civil Society Organizations, Faith-Based Organizations and governments,” the statement adds.

They acknowledged the efforts of the governments of Kenya, Uganda, South Sudan and Ethiopia governments in their continuous peace building initiatives both nationally and across borders.

“We however call on the governments in our region to take a lead role in sensitizing the pastoral communities on the need to embrace peaceful co-existence and peaceful disarmament,” it reads.