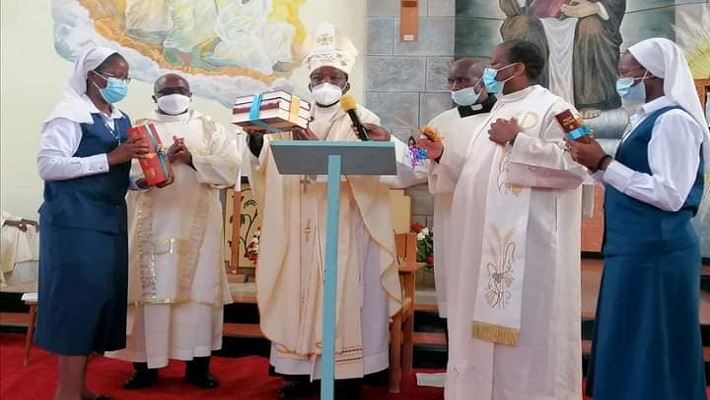 “We gather here to launch this Misale Ya Kiroma (Roman Missal), Misale ya Kilasiku (Daily Missal) and Masomo ya Misa (Lectionary). These three liturgical books are a great gift to our Church in Kenya and the AMECEA region. Their launching today marks the conclusion of a long journey by our KCCB commission for Liturgy and the Pauline Publication Africa,” said Bishop Anthony Mukobo of Isiolo and Chairman of KCCB’s Commission for Liturgy.

In his speech ahead of the launch of the books during the celebration of Holy Mass at St Thomas Aquinas Seminary in Nairobi on November 11, the bishop of Isiolo stressed that Misale ya Kiroma is a new translation of the Roman Misal and not a new missal.

“We on our part as a conference launched the new project of updating the new Swahili missal that had been in use since the year 1976. At the same time Tanzania Episcopal Conference had begun updating the same missal. After the AMECEA meeting in Malawi and another in Ethiopia, a meeting between the new conferences and the Paulines publication Africa was held in which it was decided that the two conferences work together for a common translation of the Swahili Missal,” Bishop Mukobo recalled the process that ended came to an end in 2020.

The newly translated Misale ya Kiroma received confirmation from the Congregation of the Devine Worship and the Discipline of Sacrament on November 28 2020.

Masomo ya Misa was combined using the text of Bibilia ya Kiafrica (African Bible) which received the approval for liturgical use by the Congregation for Devine Worship and discipline of the Sacraments and received its confirmation from the congregation on November 21 2018. Thereafter the Paulines Publication Africa worked on Misale ya Kila Siku.

“We have some notable changes in our prayers and responses. It is in this view that the KCCB commission for Liturgy will embark on liturgical and catechetical formation for the clergy religious men and female and the lay faithful,” Bishop Mukobo said.

The three books were officially launched by Archbishop Martin Kivuva of Mombasa and Chairman of the Kenya Conference of catholic Bishops (KCCB).