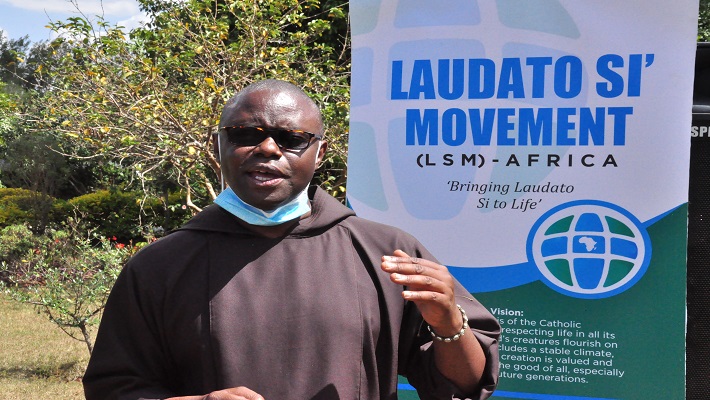 NAIROBI, NOVEMBER 2, 2021 (CISA) – Laudato Si’ Movement-Africa has joined the rest of the world in calling up world leaders to accelerate the action towards the goals of the Paris Agreements and the United Nations Framework Convention on Climate Change ahead of the UN Climate Change Conference, COP26, taking place in Glasgow, Scotland, from October 31 to November 12.

“COP26 in Glasgow is a huge opportunity for the world’s governments to take big and bold actions and show how they’re going to care for our common home by promising to reduce their greenhouse gas emissions and bring about a just transition to clean energy,” said Br Benedict Ayodi OFMCap, the Programs Manager of Laudato Si’ Movement- Africa, on October 29.

Br Ayodi elucidated on what their members would love to see as resolves made at end of COP26.

“Right now, the world is not on target to meet that goal. Therefore this is a defining moment for world leaders to set ambitious targets and reach them. Every tenth of a degree of warming will have a huge impact on how many millions of our sisters and brothers suffer because of a worsening climate crisis and how much damage we inflict upon God’s creation,’ he said.

Br Ayodi opined that Catholics around the world should care about COP26, “because our faith demands that we care for and about God’s creation and the most vulnerable, both of which are being devastated by the destructive climate crisis.”

“Two of the core principles of Catholic Social Teaching are directly related to the climate crisis: option for the poor and vulnerable and caring for God’s creation. The ecological crisis and climate emergency are destroying God’s creation and our poorest and most vulnerable sisters and brothers are hurting the most, despite having little to do with the greenhouse gas emissions causing the crises,” he added.

The member of the Order of Friars Minor Capuchin also pointed out that young Catholics and the youth at large need to be at the forefront in championing climate change and biodiversity.

“This is their future. They are the leaders who can take this process to fruition. Reshaping our energy systems and creating a more resilient and cleaner future will be a decades-long process that they are leading in some ways and eventually will completely lead,” said Br Ayodi.

“Young people also have an opportunity to truly create a different future. They can decide the future they’re going to create and draw a line and say, no more fossil fuels, and then work tirelessly to create that future for our common home,” he added.

Br Benedict Ayodi was speaking in an event held at the Franciscan Family Association (FFA) – Portincular Centre in Karen,  in which Laudato Si’ Movement-Africa in collaboration with various artists in Kenya, and solidarity with the rest of the world demanded that the global financial systems stop pouring billions into fossil fuels, under the hashtag #DEFUNDCLIMATECHAOS.