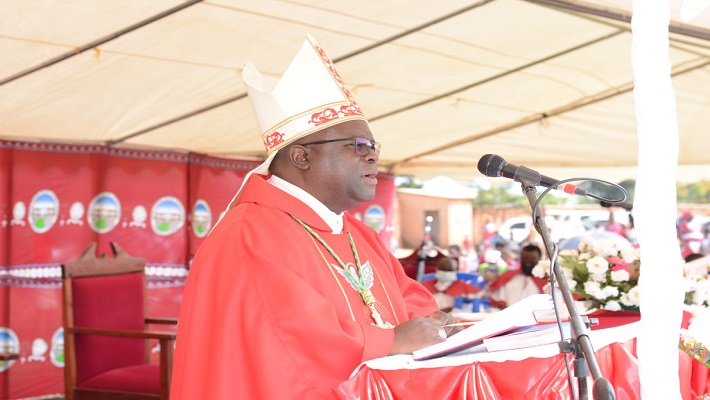 LILONGWE, AUGUST 2, 2022 (CISA) – Archbishop of the Archdiocese of Lilongwe, George Desmond Tambala, has urged all Catholic faithful to use social media prudently and only to the glory of God and His Church.

“We have noted the Mushrooming of so many WhatsApp and Facebook pages and groups bearing the name Catholic. Much as we appreciate the desire to share Good News and other beneficial teachings of the Church, we have noted that some have turned these initiatives into gossip zones whose main agenda is to destroy each other’s character and reputation,” observed the archbishop.

The ordinary for the Archbishop of Lilongwe, who is also the president of the Episcopal Conference of Malawi, further challenged Catholics to seek proper guidance from relevant authorities in establishing social media forums that will bear the Catholic name.

“We have noted that others are soliciting funds in the name of these Social Media Church Groups yet lack accountability and transparency how the funds are used. Let anybody soliciting funds be accountable and seek permission, especially here in the Archdiocese of Lilongwe, otherwise stop tarnishing the Ecclesiastical name,” Archbishop Tambala said also urging the Catholic faithful to defend their faith against unjustified aggression.

The archbishop said this on Saturday 30th July 2022 at Maula Cathedral in the Archdiocese of Lilongwe where there was a double launch of the 2022-2023 Archdiocesan Mini Synod under the theme Discerning with the Holy Spirit, and the day of the Laity at Archdiocesan level.

Lilongwe Archdiocese had the first Mini Synod in 1973-1975 sanctioned by Bishop Patrick Kalilombe under the theme Mpingo Ndife Tonse which reminded the faithful of the need for active participation and in the years 2004-2006, Bishop Mkhori sanctioned the second Synod under the theme Tiyende Limodzi which addressed the importance of collaborative ministry and unity.

The Archdiocese has called on all people to walk together in this path saying, “Therefore during this Synodal process, all Catholics are invited to listen with open hearts and minds, to share from their own lived experiences, and to make space for the voices of those often marginalized or excluded. Just as the first assembly in Jerusalem healed the tensions among members of the early Christian community, a synod like this one should fundamentally be a process of healing, both from wounds suffered inside the Church, and those experienced in other areas of our lives and relationships. It should be a platform where the People of God see the new ways of experiencing and practicing those supreme virtues of unwavering faith, hope and love in their own situation. By this Synod, we should find ways of binding ourselves to Christ as the Way, the Truth and the Life (John 14:6); and to one another”.

On his part Archdiocesan Laity Chairperson Mr Gabriel Kamlomo, called on the faithful in the archdiocese to work together toward implementation of the Synodal process. He challenged the laity to be more active in developing the diocese to match the demands of modern time. He then thanked the Church in Malawi for establishing the laity day which will enable the faithful to deeply reflect on their role and contributions towards a self-propagating, self-evangelizing and self-sustaining Church.

As of 2010 Census, the Catholic Archdiocese of Lilongwe has 1, 051, 874 Catholics and 55, 871 catechumens, of the 4, 392, 781 total population of the catchment area. Currently the archdiocese has seven deaneries of Maula, Mtima Woyera, Salima, Madisi, Mchinji, Likuni and Dowa, forty six parishes and three suffragan Dioceses of Mzuzu, Dedza and Karonga.