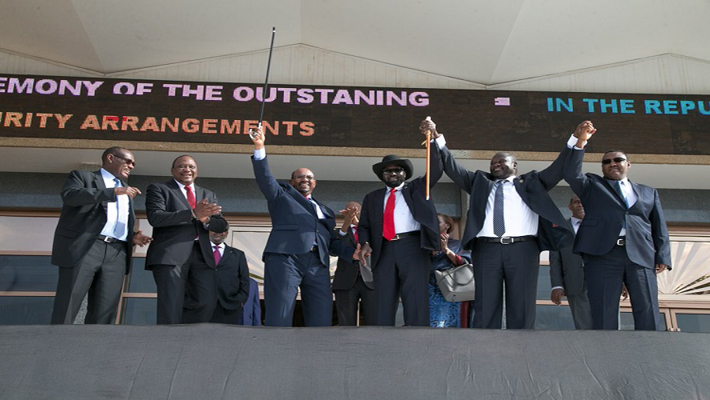 The power-sharing agreement will see Riek Machar reinstated as the Vice President and stipulates that there be 35 ministers in the transitional government, including 20 Kiir allies and nine backers of Machar along with representatives of other rebel factions.

“If the peace agreement holds, it can only be good news for the region in general,” said Douglas Johnson, an expert on the region while talking to Deutsche Welle.

Insecurity in South Sudan has affected neighboring counties such as Ethiopia, Kenya, and Uganda which hold refugees.

According to Norwegian Refugee Council (NRC) Seven years after South Sudan’s independence, over four million people have been displaced and 7.6 million people are in urgent need of humanitarian assistance.

Speaking at the signing of the agreement President Uhuru Kenyatta of Kenya welcomed the deal and promised Kenya’s support in restoring peace in the nation.

“Today, I offer you the promise of the Kenyan people. As we have done, we shall continue to walk with you from this moment of great expectation to the full implementation of a revitalized agreement,” said President Kenyatta

Previous deals have failed to end the conflict and residents of the capital, Juba, said they are desperate for this one to succeed.

“What people want is services. People want peace. People want their children to go to school. (They want) hospitals and security and clean water. These are things now citizens are hoping for from our leaders,” John Kenyi, 30, a newspaper vendor in Juba, told Reuters.

Kiir last week said the new peace agreement mediated by Sudan and East African nations would hold because outsiders did not impose it and other deals had failed because of external pressure.

The agreement also outlines guidelines on power sharing and governance, including settling boundary disputes which will be guided by a boundary commission and provides for an avenue for the people of South Sudan to participate in a referendum if need be to settle those rows.

The next round of negotiations will continue in Nairobi.