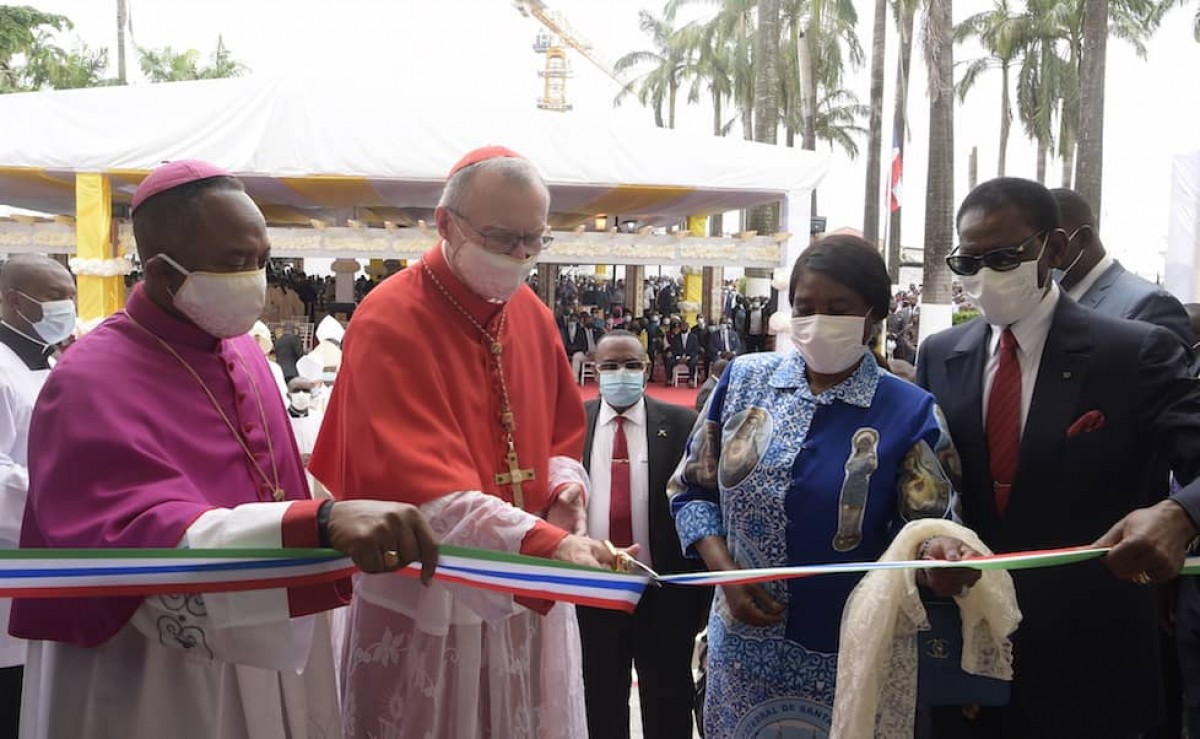 MALABO, AUGUST 17,2022 (CISA)– The Metropolitan Cathedral of the Immaculate Heart of Mary of the Catholic Archdiocese of Malabo commonly known as St. Elizabeth’s Cathedral, was on August 15, re-dedicated and inaugurated in a colourful Mass celebration on the Feast of the Assumption presided over by Vatican Secretary of State, Cardinal Pietro Parolin.

The cathedral, which was ravaged by fire on January 16, 2020, is a national cultural heritage of great religious, historical and architectural value, whose construction work dates back to 1897 by the Spanish architect Gaudí.

Cardinal Pietro Parolin, representing Pope Francis, was the chief guest alongside President Teodoro Obiang Nguema among a host of bishops from neighbouring countries under the invite of Archbishop Juan Nsue Edjang of Malabo.

The head of state attested to the deep roots of the Catholic faith in the country, which is reported to be about 90% of the total population. He also pointed out that “the destruction of the cathedral caused deep sorrow and sadness among the population, and for that reason, the Government had undertaken its rehabilitation.”

The president in a report by his press office “affirmed that the Cathedral was not just any building, as it had witnessed important national events such as the proclamation of National Independence on 12th October 1968. It is loaded with symbolism and has witnessed the most important events of historical significance in our country,” and also “extended an invitation, through Cardinal Pietro Parolin, to Pope Francis to visit Equatoguinean soil.”

Regarding the August 13 courtesy call to the president at the People’s Palace in Malabo, Cardinal Parolin is said to have held talks with the head of state on the general situation in the country.

“Above all, I thank the President for his cordial welcome and the possibility he provided to have a conversation. It was very important to talk a little about the general situation in Equatorial Guinea regarding the political, social and ecclesiastic aspects, underlining once again the will of both parties, Government and Church, to work together for the material and spiritual well-being of this beloved country,” said the Vatican Secretary of State in his maiden visit to Africa’s only Spanish country as reported by Equatorial Guinea’s Press and Information Office.

The rehabilitation of the cathedral, according to government sources, cost more than 9 billion FCFA, and focused on “all areas of the church, including its respective south and north annexes, the choir areas, the towers, the central body, the roofs, the clock body and all its components and accessories, in addition to the furniture, as all these elements were destroyed by the devastating fire.”

The event was also attended by Archbishop Julio Murat, the Apostolic Nuncio to Cameroon and Equatorial Guinea, Bishop John Dominic Beka, president of the National Episcopal Conference, and the prelates of Bata, Ebebiyin and Evinayong, respectively.

Equatorial Guinea is one of the smallest countries in Africa, comprising mainland and offshore islands. It is the only Spanish-speaking African country.