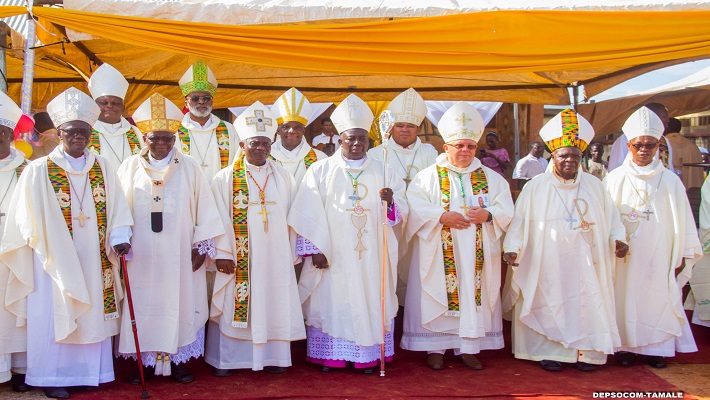 YENDI, AUGUST 23, 2022 (CISA)-The Ghana Catholic Bishops Conference (GCBC) has dismissed the argument that the government should determine who heads schools built by the Catholic Church on grounds that it pays salaries for teachers in such schools.

Speaking on behalf of the bishops on August 20, during the installation of Rev Fr Matthew Yitiereh as the new bishop of the Catholic Diocese of Yendi, Archbishop Philip Naameh, president of GCBC, held that Catholics are also taxpayers and salaries should not be the basis to dictate who heads the schools.

“I want to ask all of you, are Catholics not taxpayers? The Catholics also pay tax and they have the right to government subsistence assistance to the development of their schools for the assistance of all Ghanaians,” the archbishop said calling for the collaboration between the state and Church in improving the quality of education in the Catholic-owned schools.

“I would like to appeal to the municipal and district directors of education to continue to contribute to the quality of the catholic schools by ensuring that they appoint Catholics to head all these Catholic schools so that the Catholic Church would be put into a position to instil that discipline for which catholic institutions are known,” added the archbishop of Tamale.

According to Archbishop Naameh, the appointment of Catholics as heads of their institutions would ensure holistic education by not only improving academics but also building integrity among pupils and students for the benefit of society.

“When we are allowed to instil our discipline, the Catholic schools as you all well know benefit everybody. We take everybody, we don’t ask of what faith the people belong to. But at least we have the tradition of holistic education not only impacting the minds of the students but building up morality and integral formation of the people, relationships with other ethnic groups with whom we are living and making everyone know that we are all sons and daughters of the one God,” he said warning education directors against frustrating the Church, its efforts and blocking its vision in the establishment of the schools.

Leading the government delegation at the event, the Minister of Defense, Dominic Nitiwul, acknowledged the concerns of the Catholic Church citing himself as one of the beneficiaries of the discipline, which the schools are known for.

The Saturday event that took place at St Charles School Park, Yendi, saw the former Vicar General of the Catholic Archdiocese of Tamale ordained and installed bishop of the Catholic Diocese of Yendi.